All India Democratic Students Organisation (DSO) members led by Chitta Ranjan Mishra on Saturday staged a silent protest by putting on black ribbons on their faces before the district Collectorate here demanding adequate compensation to the Delhi rape victim’s family.
Expressing deep anguish over the victim’s death, they also demanded exemplary punishment to the rapists and prevention of the spread of obscenity in the society.

Even as the Government has been making tall claims of taking numerous steps for upliftment the poor and vulnerable people, especially children, yet distress migration has witnessed little abatement in the western and southern parts of the State.
The most grueling factor is the migration of kids, deprivation of their childhood joys, right to education and care, who have to work hard and face exploitation at the hands of their employers in various hazardous brick kilns in Andhra Pradesh.
In a shocking incident, minor Raju Mahanada has been held hostage in a brick kiln of Andhra Pradesh for incomplete work and failure to remit advance money his parents had received before going for work.
According to reports, Padmamahananda of ChoulSukha Village along with her two sons Rajin and Raju had migrated to brick kilns of Andhra Pradesh by taking advance of `90,000 from broker Ramesh Seth. The trio worked in a brick kiln in the Andhra Pradesh for years. However, when they wanted to return home, the brick kiln owner did not allow them saying that he had not got service worth the advance money paid to them. After much pleading, he, however, let off Padma and Rajin, but kept the teen ager Raju with him as mortgage.
According to reports, Raju has been held in the brick kiln owned by one K Ramesh of Rajbollaram village under Medhachal police station limits in Ranga Reddy district of Andhra Pradesh. Returning home, Padma requested advocate Bishnu Prasad Sharma to get her son released.
“We filed a petition in the JMFC requesting the police to trace and rescue the child. Magistrate Sashirekha Mishra directed the Kantabanji police to trace the child,” informs advocate Sharma.
It is not an isolated case. Many unfortunate children suffer similar fates which go unnoticed. The Government should be pro-active to ensure that the children are not abused and protect them against any exploitation or abandonment. The district administration should set up a Help Desk to collect the information of bonded and abandoned children and take steps for their rescue and proper rehabilitation, says Sharma further.
“The court order has not been received by the police. On receipt of the order, we will coordinate with child welfare committee to trace out the missing child,” says Balangir SP R Praksh. 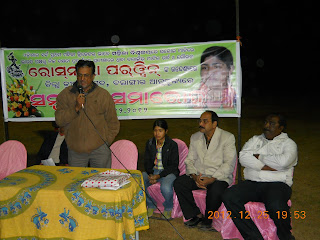 A total of 167 migrant labourers, including 35 children, from different parts of western Odisha, were sent home on December 23 after a surprise raid by Revenue officials of Guddur in Andhra Pradesh on several brick kilns.
The migrant labourers of 41 families from Loisingha, Balangir Sadar, Deogaon blocks in Balangir, Gaisilet, Bijepur, Padampur and Barpali blocks in Bargarh and Dhanupali of Sambalpur had migrated to Andhra Pradesh through a middleman Chaitu Bag of Kapsipali on December 21.
Out of the 167persons, 132 persons working as bonded labourers were released. According to reports, all adult members had taken an advance of Rs 11,000 per head and arrived at Guddur station on December 23. Revenue Divisional Officer of Guddur J Nivas was monitoring the migrant labourer issue.
All the migrant labourers informed the Revenue Divisional Officer that they had come to work in brick kilns after taking advance money.
After listening to them, the officer called the owners of brick kilns and enquired into the whole incident. He found violation of the provisions of the Bonded Labour Abolition Act and Interstate Migrant Worksman Act.
He imposed and collected Rs 6, 80,000 as penalty from the owner of brick kilns for the offence, who had recruited the labourers. Rs 5,000 was given per person, during their time of release. With help of NGO ARD, Aide et Action, Action Aid, local police and railway authorities, the entire rescue process was completed.
Moreover, the Revenue Divisional Officer also made arrangements of a coach in the Allepy-Dhanbad train for safe travel of the migrant labourers, while Dayasagar Pradhan of Aide at Action accompanied the labourers from Guddur to Balangir.
The labourers arrived at the Balangir railway station at night on December 25. They were received by Saroj Bark of Aide et Action along with his team member Murali Das, District Labour Officer PK Bhoi and other officials from DRDA and the district administration. There was elaborate police arrangement at the railway station. Balangir SP R Prakash was present.
==========================================================

Roshanara Parveen, young girl from Balangir was included in T-20 world cup team was given felicitation by District atheletic Association.Balangir 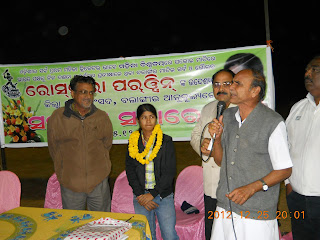 Students demand death sentence for rapists
Students demand death sentence for rapists
Wednesday, 26 December 2012 00:11
PNS | BALANGIR
Hits: 22
inShare
Demanding death sentence to the criminals involved in the gangrape of a young girl in Delhi and adequate justice for her, students of the Balangir Government Women’s College staged a rally in the town on Monday.
“We demand death punishment for the culprits involved in the rape incident,” said president of the college Students’ Union Smruti Rekha Pradhan. The rapists should be made impotent and let the whole world see their faces and know them so that in future they do not dare to do any such incident, she said further.
The students’ agitation was supported by "We Care". Later they submitted a memorandum to the President of India through the district Collector which demanded establishment of Fast Track Courts to deal with complaints of assault against women, functioning of Women’s Commissions without pressure of government, toll-free telephone numbers to receive the complaints of women and capital punishment for rapists and publication of rapists’ photographs so that they face humiliation in the society.