B’ngir Forest Guard suspended
Friday, 28 September 2018 | PNS | BALANGIR
Balangir DFO Sameer Satpathy has placed Forest Guard Itishree Badhia under suspension for serious negligence and dereliction of duty resulting in the death of a wild elephant.
On September 19th, a male elephant died at Upparjhar in the Balangir Forest Division due to electrocution.
Although initially, it was reported as a female elephant, after postmortem it was known as an adult male elephant.
However, Itishree Badhia told this correspondent, “I have done my duty sincerely and informed the higher authorities about the development at the field. I have already informed about the incident to our association. I want my suspension to be withdrawn.”

Training of Trainers on pre-departure orientation of women migrant workers held in Bolangir.

Training of Trainers on pre-departure orientation of women migrant workers held in Bolangir. 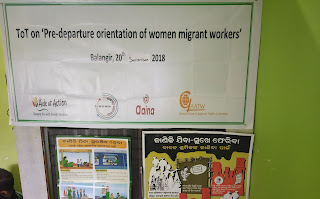 Bolangir:20th September 2018.
With a view to reduce the exploitation of migrants women and adolescents girl of Western Odisha,by educating them with providing relevent information,a Training of Trainers  on pre-departure of women migrant workers, was held at Bolangir today.

Out of the total registered migrant around 50 percent or even more constitute migrant women and adolescent girls who faced discrimination and neglect  starting from the beginning of journey,at work site and  staying in brick kiln in terms of wage and other facilities,it was pointed out during the discussion.

A sample survey carried out in six Panchayats of Bolangir, Kalhanadi, Bargarh, Sonepur  district revealed that, majority of women and adolescents girls are migrating against their wishes and due to family complexion.To reduce the vulnerability of women and adolescents girls,we are going to held meeting of migrants women in Panchayat and would sesitize them about their rights and other valuable and relevant information,so that they could feel empowered and also help others in brick-kiln in times of crisis,says Saroj Barik of Aide et Action Bhubaneswar.

These women migrants would be provided a card containing all the details about her and district level information and other details of concerned officials,who can be contacted in case of any problem. 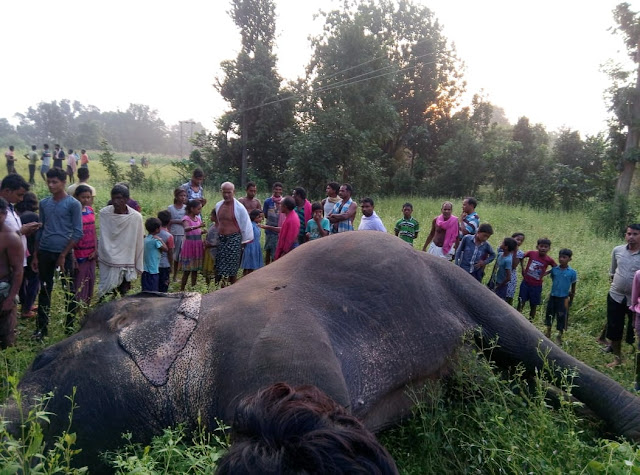 Bolangir An adult female elephant was found dead in Upparjhar -Phatamunda road near Kuimunda, around 24km away from here. Initial reports suggested that the elephant was electrocuted as an electricity pole fell down on it while moving in the area. The forest officials dismissed allegations of poaching.
On a tipoff, forest officials, including DFO Balangir Sameer Satpathy, ACF BC Roul and others rushed to the spot and recovered the carcass. “More details would be known after the postmortem report of elephant was available,” clarified Forest Department sources.
It would be pertinent to mention here that in October 2017, a joint coordination meeting of Wesco officials and forest officials of Balangir and Subarnapur districts was held at the DFO office. In the meeting, several vulnerable points where elephant are prone to electrocution were identified.
However, a proposal for corrective actions is now gathering dust in the PCCF office
at September 23, 2018 1 comment: 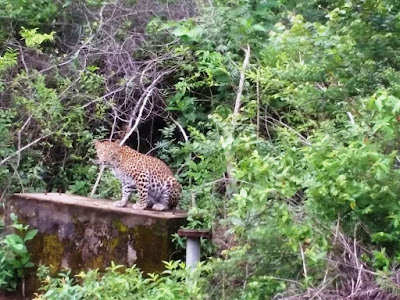 In yet another instance of leopard sighting, the people in Balangir saw a leopard at Mahima Chowk near Gulmi forest, 50km from here, on September 14. Consequently, there is panic in the locality.
According to reports, people saw the leopard sitting on a concrete structure of water pipes.
Notably, the cement structure is near the water project at Dumerbahal  from which water is supplied to the ordnance factory at Badmal through large pipes. While going through the road towards Balangir from Titilagarh, people saw the leopard sitting over a cement structure on the day of Nuakhai. Staying a few minutes, the leopard vanished.
According to sources, there are around eight leopards in Titilagarh forest range. A good deal of the area comes under the jurisdiction of ordnance factory, Badmal. As there is water source of Dumerbahal project and protection due to the boundary of the ordnance factory, leopards are often sighted here. There is no incident of any attack by leopard so far.
However, Titilagarh range officer J Nanda rubbished the report of leopard sighting. “We don't have any reports of leopard sighting in our area,” he said even as there were confirmed sources of the sighting. 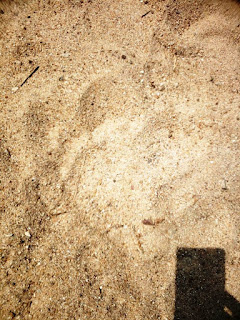 Pugmark of the leopard)

Even as the people of Balangir district and other areas are rejoicing due to the Nuakhai festival, yet the appearance of a big leopard in the Shiv Durga temple located near Malpada village, 40km from here, under Deogaon block on Friday evening has sent shockwaves.
The temple is located just below a hillock (dungar) and adjacent to Punjigoad jungle, which shares borders with Upparjhar forest area and Sulia Ghati forest in Boudh district.
According to reports, a person had brought his new tractor for worship by the temple priest. However, as the priest had gone to the village for Nuakhai, he waited for sometime there.
By this time, he heard some sounds from the nearby foliages and soon a big size tiger (leopard) appeared and stood a few seconds before a tree where the deity is worshipped. The man there remained awestruck.
As the temple is located around 1km from the village and that too, near the forest, nobody was there. Later, the tiger disappeared from the place.
According to reports, a few days ago, there were incidents of cow lifting in the area of Mukundpur-Puranpani areas.


“We could manage to get the photograph of pugmarks of the tiger. It appears to be well grown leopard,” said a villager.
The villagers have demanded that the Forest Department take adequate steps to ensure safety of the people.

The members of Balangir district Congress Committee led by its president Dilip Behera, Samarendra Mishra and Santosh Singh Saluja staged a protest before the Collectorate here alleging corruption by the Modi Government in purchase of Rafale fighter plane from France.
The Congress leaders criticised the BJP led NDA Government at the Centre for corruption in purchase of Rafale fighter plane, fuel price rise, inflation and failure to provide jobs to youths.
The 126 Rafale fighter plane deal was finalised during UPA Government at Rs 526.10 crore per plane with France .18 planes were to be purchased from France and 108 planes were to be produced at HAL with transfer of technology.
But after the Modi Government came to power, Rafale plane deal was finalised at Rs1, 670.70 crore per plane and total 36 planes will be purchased.
The total purchase cost of Rafale plane would have been Rs 18,940 crore, whereas the Modi Government’s new deal has hiked the total purchase price of fighter plane to Rs 60,145 crore. Hence, there is a corruption of Rs 41,205 crore in the deal, the Congress leaders charged. Besides, they told if the planes were to be produced in HAL, Odisha, it could have provided employment to 35,000-40,000 youths of the State, said former MLA Saluja.