Even as the Government is making tall claims of ensuring development of backward and undeveloped areas through different flagship programmes, the performance of Biju KBK Yojana in Balangir district remains dismal with funds lying unspent for years.Every year, Balangir district gets `21 crores under the Biju KBK Yojana.However, huge sums of money remain unspent with different departments.
According to sources, a total of 67 per cent of funds were spent under the scheme in 2012-13 and in 2013-14, the spending got reduced to 44 per cent further.The huge funds lying unspent in Biju KBK programme can be attributed to many reasons, including submission of a large number of proposals below `5 lakh limit. Once a proposal is recommended or submitted within that range, no tender process is required.
As a result, the party executes it directly, but it has been found in many areas that this type of work hardly serves the purpose of creating infrastructure asset in the district. It serves the purpose of maintenance of projects, says an official here requesting anonymity.Besides the Biju KBK Yojana, in other programmes like BRGF and Additional Central Fund, huge funds also remain unspent in different blocks of the district.
According to sources, a total of `15 lakh earmarked for construction of onion godown is lying unspent in Bongomunda block since 2012-13 under the Biju KBK Yojana.Similarly, the Rural Water Supply and Sanitation (RWSS) Department has been able to spend only `63 lakh out of the `2.60 crore given in the year 2012-13 under a pipe water supply scheme under the Additional Central Assistance scheme earlier known as IAP.The RWSS Department could spend only `11.33 crore out of the total of `16.98 crore under IAP since 2010-11.

The Odisha State Commission for Protection of Child Rights (OSCPCR) would hold a regional workshop in Balangir on June 26 to review different programmes on rehabilitation of children of migrant labourers of western Odisha. OSCPCR sources said the commission had taken a decision in a meeting held on June 19 to hold the workshop at DRDA conference hall in Balangir which is known as hotbed of migrant labourers.
Every year thousands of children go with their parents to work in brick kilns and other unorganised sectors in south India as a result of which the children fail to get education and other facilities, it added. The workshop would be attended by Government officials, representatives of NGOs and members of statutory bodies of six districts, Balangir, Sonepur, Boudh, Kalahandi, Bargarh and Nuapada
at June 23, 2015 No comments:

The International Yoga Day was observed to revive age-old yoga practices for healthy and peaceful living. On the occasion, several organisations carried out a march in the town, while yoga practice sessions were held in different parts of the town where people from all walks of life, including students, participated. District Collector M Muthukumar formally inaugurated the Yoga Day function at Gandhi Stadium, organised jointly by the Nehru Yuva Kendra and the district administration.
School students and youths, especially from rural area and rural clubs affiliated to the Nehru Yuva Kendra participated.BipinBihari Jena of Nehru Yuva Kendra (NYK) who was the nodal officer of Yoga Day conducted the meeting. Later, all the yoga demonstrations/exercises, prescribed as per the Common Yoga Protocol, were conducted by Jogacharya Sibananda Das and Sasi Sekhar Panda. District Collector MuthuKumar, ADM Ashok Naik and Srikara Mishra took part in the exercise. 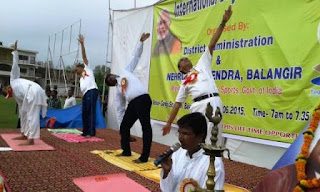 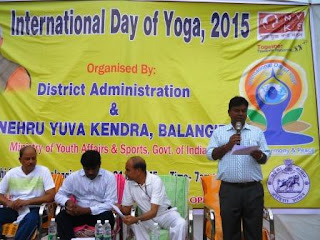 SARGIPALI RAPE & MURDER: 2 HELD
Sunday, 21 June 2015 | SUDHIR MISHRA | BALANGIR | in Bhubaneswar
===================
Two persons Jagnya Saraf and Supal Meher of village Sargipali in Khaprakhol block of Balangir district involved in the sensational gangrape of a minor girl in Sargipali were arrested and forwarded to court on Saturday. This was informed at a Press conference here by Balangir Superintendent of Police Deepak Kumar. The girl was gangraped and brutally killed on May 22. Her body was found on the side of a nullah.Giving details of the incident, Kumar said the Khaprakhol Police initially registered a case under Section 363 IPC, which turned to Sections 364, 376, 376, 20(i) and 302 IPC, Section 4 of PCSO Act and Section 3 of SC/ST (PA) Act as new facts came to light in course of investigation.
The girl had spurned the advances of the accused on several occasions. Moreover, another accused has “some relation” with a close woman relative of the deceased girl, which she had come to know and which disapproved and threatened to disclose. As both the accused are close friends and had a grudge against the girl, they wanted to silence her, Dr Kumar said.“We strongly suspect involvement of another person in this case, and we are waiting for arrival of a scientific investigation team, and the case is under investigation,” he said.
“During our investigation so far, we could not find any evidence of caste-related offence or even involvement of a liquor lobby; we rather found it to be an offence due to passion and revenge,” the SP said.Asked to comment on the report of pouring of acid on the girl’s dead body, Dr Kumar said that according to a of forensic report if a body lies open in temperature of above 42 degree Celsius, it would decompose fast and maggots would be formed and it would appear different. The investigation has so far revealed that there was gangrape.
The inquiry officer has been asked to submit a joint inquiry report early so that compensation under provisions of the (POA) and SC/ST Acts can be provided to the victim’s family.The case has been marked as a “red flag case” where chargesheet would be submitted and a “holding investing officer” would be appointed and the entire trial would be conducted in a fast track court, Dr Kumar said.

Members of the local Jatio Nari Atyachar Birodhi Sangarsh Samannwaya Samiti, led by noted social activist Prafulla Samantara, CPI(ML) politburo member Sivaram, Surdas Bag and Abhiram Mallick,   on Friday held a protest march in the town demanding a CBI inquiry  into the brutal rape and murder of minor girl of Sargipali and compensation of Rs 20 lakh to the victim’s family.
They also demanded trial of all SC/ST atrocity cases in Fast Track Court, declaration of Khaprakhol as an atrocity-prone area and efficient functioning of the district vigilance and monitoring committee.
The protesters raised slogans against the Balangir police for its inability to arrest the culprits even though 25 days have elapsed since the occurrence of the incident. They submitted a memorandum on the issue to the district administration.
The incident of brutal rape and murder of the minor girl has shocked the conscience of all sections of people here. Unless the police arrest the culprits within 24 hours, there would be further agitation, warned Prafulla Samantara.
When contacted, Balangir SP Dr Deepak Kumar said, “We have got some vital clues, and we hope to nab the culprits and crack the case soon.”

The decision to install a statue of Parshuram Satpathy, a young journalist who was brutally murdered and whose killers were brought to book after 41 years, at Tikrapada Chowk here has sparked off a row, with locals of Tikrapada opposing it and demanding installation of a Gandhi statue instead.Notably, the Balangir Municipality had passed a resolution for the installation of the statue and Rajya Sabha BJD member AU Singh Deo had attended the Bhumi Puja along with BJD councillors recently.
“We oppose the decision to set up the statue of Parshuram Satpathy. Let his statue be installed in other area of Balangir. We have no objection. In 2006, on the occasion of Silver Jubliee of Gandhi Pathagar, we had in principle decided to name Tikrapada Chowk as Gandhi Chowk and a statue of Mahatma Gandhi was to be installed here,” said Bhagabana Bagarty of Gandhi Pathagar in a Press conference on Tuesday evening.

Newly-elected president of the Balangir District Bar Association Ashok Mahanty, in an informal chat with this correspondent on Tuesday, opined for creation a new RDC (Revenue Divisional Commissioner) office in Balangir, besides opening a DIG of Police office here.
Balangir is now under the RDC (Northern Division), Sambalpur, which was created in the pre-Independence period. A lot of changes and development have taken place in the field of administration and new challenges have emerged in recent times. To provide administration at the doorsteps of people and for effective functioning, the existing RDC Northern Division should be redrawn and a new RDC Division should be set up in Balangir, Mahanty argued.
Similarly, for better police administration, a DIG office should also be opened here. Mahanty said. He also asserted to carry forward the agitation to set up a permanent Bench of the Odisha High Court here.
Mahanty was elected as president of the Balangir District Bar Association for 2015-17, defeating Arbindakshya Pujhari in the election held on Monday. 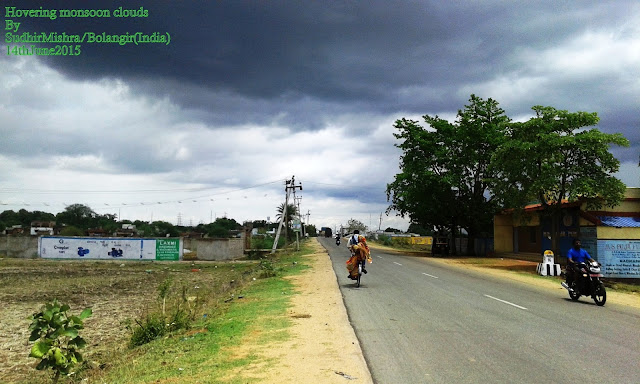