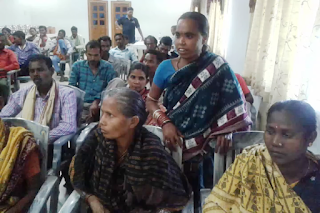 RESCUED, B’NGIR WOMAN MIGRANT WORKER REBUILDS LIFE
Friday, 28 April 2017 | SUDHIR MISHRA | BALANGIR | in Bhubaneswar
(Photograph of Kuntala Jal sharing her experience in atraining of bonded labourers inBolangir)
1
2
3
4
5
Kuntala Jal (35), a bonded labour  of Siletpada village of Muribahal block, who had migrated to the brick kilns of Tamil Nadu, has rebuilt lives with dogged determination through wage work under MGNREGS, and resolved not to go for migration again and face the ordeal.
“I had migrated to brick kilns of Tamil Nadu along with my husband and a minor child in 2011.While we worked at brick kilns, my minor son worked as brick head loader there. I took him along with me as in the village we were not getting support from our nearby relations .However, after a few days of working, the brick kiln owner gave only Rs 50 per week which was woefully inadequate and we protested. Our protest incurred the wrath of the brick kiln owner who assaulted us,” says Jal.
However, acting on a complaint, there was a raid in the brick kiln by the Tamil Nadu police and we were rescued from there. Although my son was reading in school, due to migration that was disrupted .After coming from the brick kiln, I ensured the education to my child with difficulty. I worked as daily labourer and then worked as a labourer under the MGNREGS. Last year I earned Rs 35,000 from wage employment and this year I have earned Rs 10,000. I have admitted my son in the Kantabanji College and he is studying in plus two arts final year, adds Jal.
She however laments, “Even though six years have elapsed in the meanwhile, I am yet to receive the remaining bonded labour assistance, totaling Rs 60,000.” I have resolved not to go for migration again and shall try to ensue education to my child to build a better future, Jal maintains.
As per the Bonded Labour System (Abolition) Act 1976, a labourer who is released as bonded labourer is given Rs 1,000 as assistance immediately and the rest Rs 19,000 is given with a rehabilitation plan so that the labourer does not return to bondage again.
According to sources, the rehabilitation assistance of at least ten labourers are lying pending at different blocks of the district. Balangir district has a total of 162 bonded labourers who have not received their rehabilitation assistance since 2013, thanks to the apathy of officials
=======================================================================.

BALANGIR BONDED WORKERS TAUGHT ABOUT RIGHTS
Saturday, 22 April 2017 | PNS | BALANGIR | in Bhubaneswar
1
2
3
4
5
An orientation programme on Draft Anti-Trafficking Bill 2016 was organised by the Migration Information and Resource Centre (MIRC), Bhubaneswar held here on Friday.
Bonded labourers of Balangir, Nuapada, Subarnapur and Bargarh districts attended the programme. Various features of the Bill were explained to participants in Odia. The labourers sought to include them in district and State level bodies for proper redressal of their grievances.
MIRC’s Umi Daniel called upon bonded labourers to strengthen their organisations to put forth their problems at higher forums. “The bonded labourers have all rights to fight to stop distress migration and bondage,” said Daniel.
Some labourers narrated how they have rebuilt their lives with rehabilitation assistance.


Among others, Saroj Barik, Jyoti Prakash from Aide Et Action Bhubneshwar explained various provisions of the Bill.
at April 30, 2017 No comments: 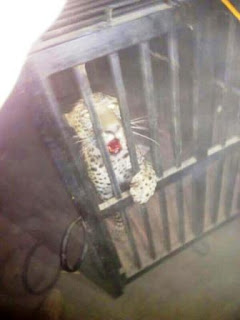 B’NGIR LACKS FACILITY TO CONTROL WILD ANIMALS
Wednesday, 19 April 2017 | pns | BALANGIR | in Bhubaneswar
1
2
3
4
5
Even as the leopard, which had sneaked into Kurli village and injured two persons on Monday, was finally caught, locals are unhappy that forest officials took 12 long hours to take hold of the animal as Balangir had no necessary equipment and manpower to tackle such a situation.
Though forest officials swung into action immediately, yet they didn’t succeed in catching the leopard. The wild animal was grabbed after 12 hours only when a wildlife expert team was brought in from Bhawanipatna.
“Had Balangir forest division been equipped with tranquiliser and expert teams, the leopard could have been caught early without harming people, locals pointed out.
Another important aspect which needs serious attention is how to control the curious mob. The tiger might not have attacked Kantabanji Forest Range Officer and another person, if panicked villagers didn’t throw stones at the cow-shed where the leopard was hiding.
Two important points haunt people’s mind are lack of water and prey forcing wild animals to come to human habitations. The water bodies of three metre width or 10 feet depth created by the Forest department in jungles are dried up in summer. Hence, the depth of water bodies should be increased, demanded locals.
High temperature is another reason that makes wildlife restless in the jungle.
Meanwhile, the leopard was taken to Harishankar and released in deep Gandhmrdan Reserve forest on Tuesday.

FOREST RANGER INJURED IN LEOPARD ATTACK IN B’NGIR
Tuesday, 18 April 2017 | PNS | BALANGIR | in Bhubaneswar
1
2
3
4
5
After a gap of two years, leopard scare gripped some villages in Balangir district again as a big cat attacked and injured Kantababji Forest Range Officer Vijaya Khuntia in Kurli village on the outskirt of Kantababji town on Monday morning.
According to reports, on being informed that a leopard has sneaked into Kurli, Khuntia along with two staffs went to the village to know the truth. When they were returning, the leopard came out of a house, as some villagers threw stones at it, and attacked the Range Officer, injuring him on the hand and eyelid. He was then rushed to the District Headquarters Hospital.
The leopard might have strayed into the village while following a prey. It might have come from Raju reserve forest in Tureikela block to Jhalialiti village forest, which is located around 6 km from Kurli, said an official.
Meanwhile, Regional Circle Conservator of Forest Suresh Panth, DFO Rashmi Ranjan Naik and other forest official rushed to spot and were monitoring the situation. A tranquilider team from Hirakud is moving to the spot, reports said.


It may be noted that, two years ago, a leopard had sneaked into an orphanage located at Pathachepa and injured calf.
at April 30, 2017 No comments:

1
2
3
4
5
It is common in western Odisha to find people, especially unskilled youths, migrating to Andhra Pradesh, Telangana, Tamil Nadu and Karnataka in search of livelihoods and often facing exploitation, torture, hardship and even losing their lives.
However, in new development, a skilled youth, Tuleshwar alias Suryaa Sahu (35) of Bolangir town, who was working as tailor in a company at Tirupur in Tamil Nadu died at the Vijayawada railway station while returning home on Wednesday, His body was brought to Balangir on Saturday.
Suryaa used to migrate to Tirupur often from Balangir during the last six years. He had earlier quit his job at a company and joined a new one at Tirupur 25 days ago. As he suffered from fever, his family members told him to return home. While on his way home, he complained of stomach pain and died at Vijayawada.
“Suryaa died allegedly due to negligence by the company where he worked. Had the company taken adequate medical care for him, his life could have been saved. We demand compensation to the deceased labourer’s family from the Balangir district administration,” demanded social activist Lalit Nayak speaking to mediapersons here.
“The Labour Department will conduct an inquiry into the incident. We will also contact labour officials of Tamil Nadu. After inquiry, appropriate measures will be taken,” said Balangir Assistant Labour Officer Dileshwar Khakha.
at April 16, 2017 No comments: 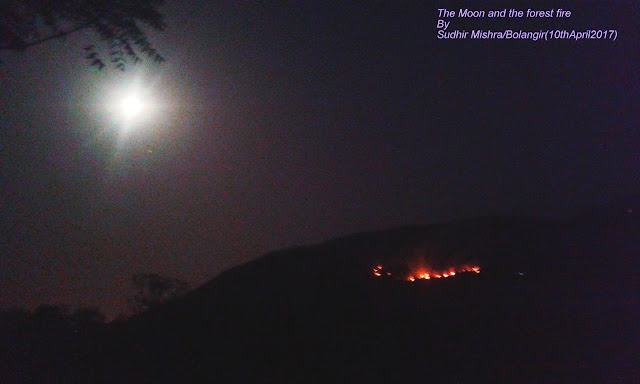 The Moon and forest fire
By
Sudhir Mishra/Bolangir
10thApril 2017.
The Moon watches helplessly as forest over the mountain burn in night
at April 11, 2017 No comments:

B’GIR TRIBAL BODY CONCERNED OVER SLOW INQUIRY
Monday, 10 April 2017 | PNS | BALANGIR | in Bhubaneswar
2
3
4
5
The Zilla Adivasi Kalyan Sangh of Balangir has expressed concern over the slow process of investigation by police into the fake caste certificate issues and urged the police administration to expedite the inquiry process and submit report to the Revenue Divisional Commissioner (RDC) Sambalpur.
A delegation of tribals on Saturday led by Sangh secretary Niranjan Bisi, Braja Kishor Singh Bhoi and Zilla Parishad Member Satya Narayan Bhoi met Additional SP Sashi Bhushan Satpathy, ADM Laxmikant Pyarelal Pradhan, Sub-Collector Bimal Prasad Mahanty and appraised their demands.
As per a ruling of the Supreme Court, there should be a DSP of Vigilance in the SP office who would inquire into fake caste certificate issues and report it to State-level scrutiny committee. Moreover, earlier it was decided that the police administration would complete inquiry of 33 cases of fake caste certificate each month. For one year, it was followed but later slowed down to almost nil report.
“RDC officials are also informing us that no inquiry report from the SP office is reaching here,” said Niranjan Bisi.
Additional SP Satpathy informed that a total of 11 completed cases, including five this year, have been submitted to the State-level scrutiny committee.
“We are leaving no stone unturned to arrest the main accused Bijaya Bariha of the Pardhiapali case,” added the Additional SP.
The Zilla Adivasi Lalyan Sangh submitted a 10-point charter of demands to the district administration.
at April 11, 2017 No comments: 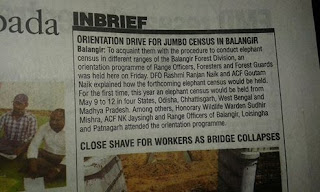 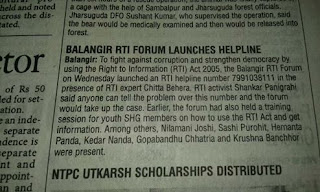