Hundreds of animals and birds, including buffaloes, goats, sheep and hens, were killed at Suliapitha near Khairguda village under Tusura police station in Balangir district, much to the dismay of animal lovers once again.
Every year Sulia Yatra is observed by the tribals at Badkhala, near Khairguda village on the second Tuesday of Hindu Calendar month of Pausha where in animals are sacrificed in large numbers. Besides, in Sanakhela, the main place where Sulia Yatra is held, animal killing also takes place with equal ferocity.
Despite wide scale condemnation of the ritual and district administration’s strict no-no, the tribals have been staging the bloodletting defending it as their age old tradition. They are also protesting ban on the killing as interference in their religious belief and customs.
Notably, this year the Supreme Court had clarified that it would not interfere in tribal tradition, custom and religious practices. After the verdict came, the district administration’s role was confined to mere maintenance of law and order.
Just two days ago, a petition by interim managing trustee of Sulias Pitha Biranchi Kaunar to stop animals killing and implement directives of the Orissa High Court to the district administration to take steps to check cruelty to animals had made the expectations high that no animal killing would take place this year. However, things were sorted out among the tribal members at a meeting on Monday last in which it was decided to latch on to the age old rituals at Sulia.
This year, thanks to the verdict of the Supreme Court, there has been no tension in the site. No prohibitory orders were imposed. Devotes brought animals to be slaughtered at the altar of the tribal deity.
“Since last four years I have been visiting the Sulia Pitha. One of my uncles met with an accident. I had prayed to Sulia god to keep my husband safe. His life was saved. As a thank giving to Sulia Budha, I have offered animals and coconut today,” said a woman devotee from Sambalpur.
The Zilla Adivsi Kalyan Sangh welcomed the verdict of the Supreme Court. “We have our own tradition and customs which we observe. The animal killing at Sulia Pitha is going on since years. The interim trustee of Sulia Pitha Biranchi Kaunar had submitted an application with district administration to stop animal killing here. But he was not invited by district administration,” said Zilla Adivasi Kalyan Sangha, Balangir secretary Niranjan Bishi.
After the recent verdict of Supreme Court, we are looking into law and order only. No prohibitory orders have been clamped at Sulia. Adequate forces have been deployed at the sites, said Balangir SP Deepak Kumar.
at January 12, 2016 No comments:

News in English daily The Pioneer

The migrant bonded labourers after being released with certificates from brick kilns and other work sites are not getting adequate compensation as per rules, thanks to apathy of the officials.

Among the poor bonded labourers, it is the migrant bonded labourers who suffer the most. The poor migrant bonded labourers from western parts of Odisha and KBK region are very prone to distress migration. They move to brick kilns of Andhra Pradesh, Telengana, Tamil Nadu, Karnataka and other districts for more than six months by taking advance and work there for long hours. However, at the work sites they are tortured and harassed. Minimum facilities are not found at the work sites as per different laws, including Labour laws.

“I had gone to a brick kiln of Andhra Pradesh in 2012 to work as a labourer. But I along with many others was rescued and given release certificate after some time. We were assured of payment of Rs 19, 000 at home. However, after returning home, I approached the local block officials and was told to contact both BDO and WEO to get the rehabilitation assistance. I submitted papers to them but till today, I have not received the money,” lamented Ragu Deep of Dumerpitha village of Deogaon block.

“I was rescued from a brick kiln of Tamil Nadu in 2011.  After returning here, I submitted the documents to the block officials for my rehabilitation assistance. However, they did not listen to us.”

These migrant bonded labourers usually return home with virtually no money with them as most of them exhaust/adjust their wage earned towards advance taken from Dalals and middlemen. Besides facing a lot of problems in the worksite and absence of minimum facility, they also are meted out with torture and exploitation by the brick kiln owners at the worksite, said an activist.

As per the Bonded Labour Systems (Abolition) Act 1976, these legally released bonded labourers are entitled to receive rehabilitation assistance of Rs 20,000. While Rs 1,000 should be given on the spot of release, the rest Rs 19, 000 should be given to them in their home place. While giving livelihood assistance, the district administration should also prepare a comprehensive livelihood plan and steps should be taken so that the bonded labourers do not return to bondage situation again.

In Nuapada district, 146 labourers are yet to get their assistance and their proposal has been pending with Panchayati Raj department for more than a year.

“At times we get incomplete proposals for rehabilitation of bonded labourers by BDOs. They do not submit the proposal in proper way. To get rehabilitation assistance, the rehabilitation assistance application should come to us with Xerox copy of release certificate, voter I- card etc. Very often incomplete application are sent to us which makes it difficult for us to send the proposal to State level and we once again send them to BDOs to comply with properly. Many BDOs simply sit over those proposals,” said an official requesting anonymity.

Moreover the district level Bonded Labour monitoring committee and sub-divisional committee are in defunct stage. They hardly meet regularly. Even when the meeting is convened only a few members turn up. The committee at district and sub divisional level should be reconstituted to make it functional to tackle the issue effectively, pointed out an activist.

The quantum of assistance of Rs 20,000given to released bonded labourers was fixed in 1976. It should be hiked to at least Rs 40,000 in view of rise in prices of all commodities, pointed out a civil society activist.

The Balingir district administration has decided to lodge FIRs against the 57 Government employees of Gudvella, Belpada Khaprakhol and Loisingha blocks for obtaining ration cards under the Nation Food Security Act (NFSA) in violation of guidelines.
District Collector M Muthukumar informed this at a Press conference held here on Friday evening.
He said Gudvella BDO has already lodged a complaint at the Tusura police station against four employees. While Belpada BDO has been asked to lodge complaints against 18 employees, Khaprakhol BDO has been advised to do so against 17. Similarly, Loisinga BDO to to lodge FIRs against 18 Government employees, said the Collector.
“This is the situation in four blocks. The situation of the rest 10 blocks will be known later. Action will also be taken against those  who have facilitated inclusion of government employees,” added Muthukumar.
He further informed that a total of 956 families have been deleted from the ration card list while 573 families have voluntarily withdrawn cards. A total of 61,647 people have been included in the list, he said, adding that the process would continue till all genuine beneficiaries are included.
When asked about exclusion Halanbhata GP from the NFSA list, he said the whole thing occurred due to late data entry by the outsourcing agency.
The eligible list of the GP has arrived and they would receive rice and wheat soon.
In an interesting development, in the initial stage, the Civil Supply office received application of more than one lakh people of Bongomunda block where as the eligible beneficiary from that block was maximum 80,000.
District Collector sought the cooperation of media men to make the NFSA list error-free and inclusion of genuine beneficiaries in the list.
at January 10, 2016 No comments:

News in English daily The Pioneer


489 MISSING KIDS FROM BALANGIR TRACED OUT

Kisan Rath flagged off in Balangir
Balangir: District Collector M Muthukumar flagged off ‘Kisan Rath’ to spread the information of CM’s packages and other agriculture schemes for farmers here on Wednesday. “We have flagged up the Kisan Rath to disseminate the message of Chief Minister’ packages for the farmers and to give more information about the Rabi cultivation in the district,” said Muthukumar. This Rath would move in the 14 blocks of the district for15 days and would cover all the villages, he added. Deputy Director, Agriculture, Manoranjan Mallick, Balangir Zilla Parishad President Bjaya Pradhani and other Agriculture Department officials were present.
at January 06, 2016 No comments:

Operation Smile 1 was launched in2014and a total of 539children from Bolangir were missing from the district. Due to dedicated efforts ofBolangir police,489children were tracedout .The Ministry of Home Affairs has asked all the state to launch Operation Smile-2.from first January to 31sJanuary2015.A total of 49children are missing from Bolangir district says BolangirSP DrDeepak Kumar further.
To trace out  these 49children a dedicated team has been formed under Inspector of  Anti human trafficking unit, which is making all out effort to trace these children.As a first step, all the childcare institutions of the district are being enquired into to know the presence of any missing child from any place across India and in the second phase a team of officials will go to TamilNadu to trace out the missing child of not only of this district but also of the state BolangirSP Deepak Kumar says further.
===========================================
at January 06, 2016 No comments:

Centenary Celebration of PRHighschool Bolangir to be held from 19to21January2016.


Bolangir ;The Centenary celebration of PruthwiRaj High(PR) school Bolangir would be observed from 19thto21January at PRHigh school field. Governor of disha SriSCJamir is schedule to inaugurate the three days function. During these three days, several eminent professors, intellectual’s dignitaries, eminent personalities, are schedule to attend the function. Seminar and other functions to held on this occasion. This was announced to media men by Convener of of PR high school centenary celebration Committee Sri ChittaranjanDas while addressing mediamen  today morning. Sri Das sought the cooperation of all sections of people, including media  to make the event a successful one 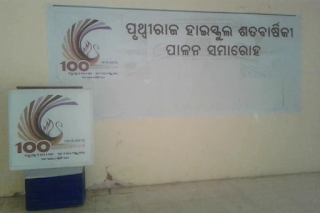 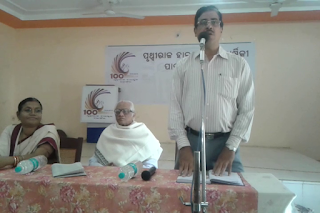