Returnee migrant workers of west and South Odisha preparing themselves for remigration ;by Sudhir Mishra Bolangir

The assessment covered 831 returnee migrant workers out of which 28 % were female.

It was observed that migrants from western Odisha are between 25 years to 44 years of age while in South Odisha the migrants are in the age group of 15 to 34 years. South Odisha migration is young adults dominated one,while Western Odisha is middle age dominated.

In Southern Odisha districts, most of the migrants were engaged in Building construction, basically people from Gajapati (52%) & Koraput (43%) districts. Also there is good number of people  from Ganjam (26%) and Gajapati  (12%) district were engaged in Garment Factories.

While in Western Odisha districts migration sector are Brick kilns followed by Building construction . The favoured destination are Andhra Pradesh Telengana, Tamilnadu  and Gujarat. Migrants said they faced several kind of problems like, food availability, lack of Transportation, lack of health facility, issue of shelter homes, issue wage payment etc. while coming back to their village.

The South Odisha migrants mostly faced the Social discrimination. Around 75 % of the returnee migrants received PDS items under TPDS, and 31% were engaged in MGNREGS work in their locality. Around 9.52% returnee migrants reported that their children were enrolled ICDS and 4.76% in MDM. Also 22% got financial support from the Govt., where as in total 23.55% of returnee migrants has not received any support from the Govt. Currently most of the migrants are engaged in Agriculture. Around 53% of said that they are planning for remigration in western Odisha  while in south Odisha it is 60%. 75% of the workers will remigrate as there is no sustainable livelihood opportunity at their villages or nearby. The migrant workers are in touch with their previous employers and fellow workers for remigration. Most of the migration is happening for short period which can be seasonal we can say and that is for 6-8 months only.

Among the civil society organisations who were part of the study in concern districts; Ananga Negi from RARE, Ashok Pattanaik from Kartabya, Satya Pattanaik from Sebajagat, Kailash Dandpata from JAGRUTI, Lokanath Mishra from ARUNA, Prasant Nayak from PAP and Rudra Pattanaik from PARDA shared their experience and status of migrant workers in their respective districts.

Facilitating the webinar Mr Umi Daniel, Director Migration & Education of Aide et Action South Asia opined that looking the migration and issues of migrant workers the government should think of setting up a new department to handle the migration issue. He also emphasised on the interstate collaboration and coordination for safe and informed migration. 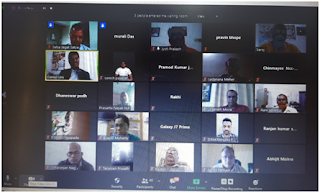 The migrants covered in the study will be followed up for next 1 year to capture the impact and coping pattern including their access to different govt. entitlements, said Umi Daniel.