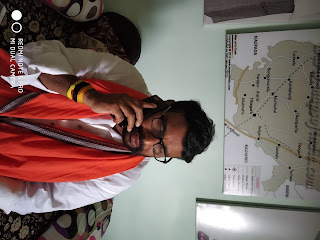 I have been working for the development of Yadav and trying to bring them near to Bharitya Janta Party. There is significant population of Yadav and OBC in the state of Odisha, including the western part of Odisha. So for the upliftment of YADAV, there should be representative from the community which would reduce their backwardness. In other State ,Yadav andOBC having less percentage of population are occupying important position and why not in Odisha,points out Balram Singh Yadav.
I like the ideology of Bharatiya Janta Party and It would be my endeavor to bring as many as people to Bhartiya Janta Party fold and strengthen party base and spread its message among the masses, Yadav says further.
Although looked impressive and logical argument, just before the parliamentary election round the corner, the sudden appearance of a person projecting as “ striving for working for Yadav,OBC and BJP”,has created ripples in the BJP Bolangir district circle, which is dominated by Royal family of Patnagarh KV Singhdeo and Sangeeta Singhdeo, since last two decades
Political observer feels that the BJP in Odisha is trying hard to realize its goal of mission 120seats and if reports are believed,it is contemplating to replace the old guards who have lost election or failed to expand BJP prospect during their time .
The Bolangir Parliament seat has been won by BJD in 2009 and in 2014 and Kalikesh Singhdeo of BJD is the Member of Parliament from Bolangir .

Political observer points out that BJP base in Bolangir Parliamentary constituency has not expanded significantly in the last  the decade and from  only  Patnagarh Assembly segment it is  represented by KVSinghdeo of BJP.

And if sources are believed, BJP is eyeing for  Bolangir MP seat this time also and there is every possibility of  BJP might project a new face to capture the Bolangir  MP seat.

With this scenario background, the caseof Balaram singh Yadav ”seems bright” as a new candidate replacing the old  members of royal family. But the movement of Balram singh Yadav has obviously caused “flutter among theBJP members” in Bolangir .

Anyone can be a member of BJP by giving a miss call and one can work for party points a worker on condition of anonymity. But holding meeting throughout the Bolangir parliamentary constituency, on the purpose of uniting Yadav and OBC, leaves enough indication that, he is projecting himself as  the BJP candidate from Bolangir  Parliamentary  seat.

Without clearance from top “sources” of the BJP, how a person could dare and move throughout Bolangir parliamentary t constituency, first to unite Yadav and OBC and then BJP flag and poster, points out a local here seeing his movement and activities of BalramSingh Yadav.

As expected, his movement has created ripples in political circles. In social media, the supporters of BJP Bolangir dominated by KV and SangeetaSinghdeo and supporters   Balramsingh Yadav have circulated “the antecedents” of their leaders, in social media like Whats app and in Facebook.

And all this activities comes amidst report of Modi leadership and charisma is still in found favour  rural area notwithstanding the badly bungled steps of demonetization and Raffle scam and others.

After the good performance in last Zilla parishad election, BJP workers were in gung-ho spirit and unless that is revived and captured BJP could have hard time again of 2014.
However, as anything can happen in election and everything is possible nothing can be ruled out. This is the pre-hits run scenario for BJP Bolangir parliament seat.
Let us see how the race for final run for BJP Bolangir Parliament seat takes place and who is going to be the BJP candidate from Bolangir. KVsinghdeo or Sangeeta Singhdeo or BalramsinghYadav or anyone else ?Time will say.
================================
Attachments area