Farmers' welfare body meets Ministers,demands ban on use of Endosulphan

Farmers' welfare body meets Ministers,demands ban on use of Endosulphan Dear Sibaand others I enclose the news,published inthe todays pioneer on farmer seekingbanon Endosulphan,for your perusal. Yours SudhirMishra Pioneer/Balangir ============================== BHUBANESWAR | Friday, April 29, 2011 | Email | Print | | Back Farmers' welfare body meets Ministers April 29, 2011 5:57:07 AM SUDHIR MISHRA | Balangir A group of farmers and civil society members of different districts met the Ministera of Agriculture and Health in Bhubaneswar on Wednesday to express concerns over the growing toxicity in the food system and demanded ban on use of hazardous pesticide Endosulfan in the food production system. The exposure to this chemical poses great risk of contamination as has been noticed in numerous instances in the State. 'This chemical is linked to seizures and long-term effects like autism, delayed puberty and birth defects. There have already been reports of women having multiple abortions, sterility and other gynecological disorders," said Siba Prasad Sahu of the Lok Vikas Sangathan. In Raisalpadar gram panchayat under Gaisilat block in Bargarh district, a discussion with farmers revealed that out of a sample of 118 farmers in one village more than 70 per cent have shown symptoms of mild hazards due to the impact of pesticide spray. A group of farmers from Nuapalli village of the same block said that at least 16 varieties of farm-fishes have died out due to the use of pesticides in farmland, said Sahu. India is one of the largest global producers of Endosulfan and the supplier of 70 per cent of the world's Endosulfan with a market value of $300 million (` 1,340 crore). Out of the 9,000 tonne, India shares about 50 per cent of its production and is bought by the country's 75 million farmers making it the world's largest consumer of Endosulfan as well, he said. The major categories of pesticides being used in Odisha without prescribed conditions are organo-chlorine, organophosphate and carbamate, mostly applied on paddy and vegetables. Endosulfan and Monochrotophos are highly used pesticides which are classified under the WHO Class-1a and WHO Class-1b hazardous pesticides, respectively. Even if merely 10 per cent of farming in the country turns organic, there would be a net saving of`25,000 crore on subsidies for farm inputs and the State can save more than `350 crore. In other States like Andhra Pradesh, almost a million farmers in 2.8 million acres of land are engaged in growing crops without pesticides, Lok Vikas Sangathan leaders pointed out. Besides Sahu, the group which met the Ministers comprised Natabar Sarngi, Prasant Mohanty and Pratap Pandey.
at February 24, 2012 No comments: 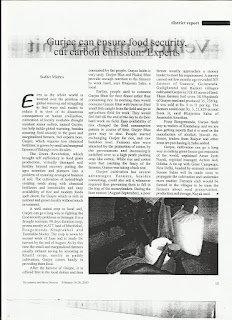 Minor Millets cultivation to be revived news in the Pioneer,29th December,2009 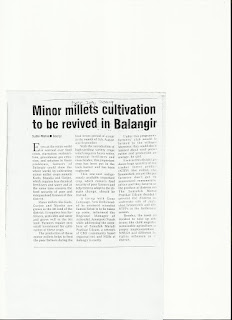 BJD ZP candidate attacked in Titilagarh; two held TUESDAY, 14 FEBRUARY 2012 00:54 PNS | MALKANGIRI/RAYAGADA/BALANGIR HITS: 31 User Rating: / 0 PoorBest On the eve of the panchayat elections on Monday, in a surprise development, a BJD zilla parishad candidate, Bhakta Majhi, was attacked near Khulan on Sunday night. Majhi was contesting in ZP Zone Seven in the Titilagarh sub-division area. While he was returning to his village Batharla, a group of persons attacked him near Khulan, 80 km from here. Majhi, who sustained injuries, was shifted to the District Headquarters Hospital here and is undergoing treatment. A case was registered at the Titilagrah police station, and two persons were arrested in this connection, informed PS IIC CP Kanhar. “It is unfortunate that our candidate was attacked by miscreants, night before the election. This was done to check the BJD’s electoral success in the district. The guilty, whoever they may be, must be brought to book. I will ask for disciplinary actions if any BJD worker is found involved in the incident,” said Balangir MP and district BJD president Kalikesh Narayan Singh Deo speaking to this correspondent over phone. ===============================================================================
at February 13, 2012 No comments:

Student hurt in Subarnapur poll violence crossfire
SATURDAY, 11 FEBRUARY 2012 01:44
PNS | BALANAGIR
HITS: 17
•
•
•
User Rating: / 0
Poor Best
Only a few days after the murder of a ward member contestant Ekadasia Majhi in Bairsar panchayat in Puintala block of Balangir district and with the first phase of the panchayat election set to take place on Saturday, a school student was seriously injured in poll-related violence at village Kamsara in Tarbha block of Subarnapur district, 35 km from here, on Friday morning.
According to reports, Dileshwar Bibhar (15), a Class-X student of Kamsara High School, was returning home after attending his tuitions when he was caught in the midst of a shootout.
“I was returning home after attending tuition class. There was a clash going on there. I was shot at from a small pistol, and I cannot say who shot at me. However, all the involved people are my villagers,” said Dileshwar.
In the area, Mandakini Bibhar and Rita Nag are contesting against each other for panchyat samiti member post. According to reports, there was a clash between the supporters of Mandakini and Rita at the village chowk, in which some people sustained injuries.
Dileshwar, who was brought to the Balangir district hospital, was later shifted to the VS Medial College Hospital at Burla for further treatment, said ADMO (Medical) Dr Dora to this correspondent.
Subarnapur SP Dasarathi Nayak has rushed to the spot of the violence.
at February 10, 2012 No comments:

Madhuri given rousing reception in Balangir
Wednesday, 08 February 2012 22:45
PNS | BALANGIR
Hits: 3
•
•
•
User Rating: / 0
Poor Best
Madhuri Mehta, the young woman cricketer of Balangir who has been selected as one of the members of the Indian women’s cricket team to play five T-20 matches in West Indies, was given a rousing welcome here on Wednesday.
“I am elated at the overwhelming response and blessings of the people of Balangir. I shall try to achieve more,” Madhuri said in response to the reception.
Asked to comment on what needs to be done for development of women cricket in Balangir, Madhuri underlined the need of a gymnasium first.
“This is the result of hard work of Madhuri and blessings of the people of Balangir. I would like to thank the senior cricketers of Balangir, and especially the District Athletic Association and Nari Bhai,” said Madhuri’s coach Arun Nayak who started coaching women cricketers five years ago. “Opening batting and fielding is the major strength of Madhuri,” Nayak added.
Madhuri, who was accompanied by her parents, Pradeep Mehta and Ahuti Mishra, was given a huge welcome at a meeting at the town hall by different sports associations, District Athletic Association and other organisations.
< Prev
Next >
at February 08, 2012 No comments:

Ekadasia Majhi, who was a candidate for the ward member’s post in Bairsar panchayat, was killed recently. Government offices, schools, banks and civil courts were closed due to the bandh. “We gave this bandh call demanding a high-level inquiry into the killing of Ekadasia Majhi and a compensation of Rs 10 lakh to his family members. The people have fully supported the bandh,” said president of Youth Congress’ Balangir Assembly constituency unit Prem Prakash Mishra.

Members of the student Congress, including its district president B Sumit Prabhakar, along with Asim Pattnaik and Kailash Mishra staged a dharna before the district Collectorate demanding fulfilment of their demands. Later, they submitted a memorandum to the district administration in this regard.

All the four accused mentioned in the FIR relating to the Ekadasia Majhi case have been arrested and forwarded to the court, said local ASP Srikant Mishra. Further investigation is on, Mishra added.
at February 07, 2012 No comments: